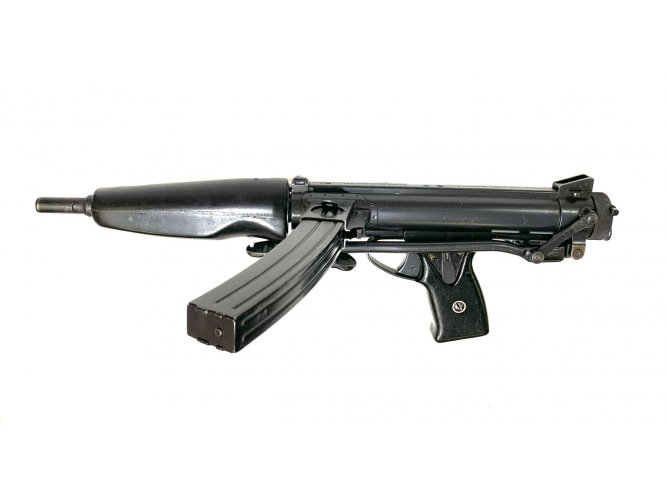 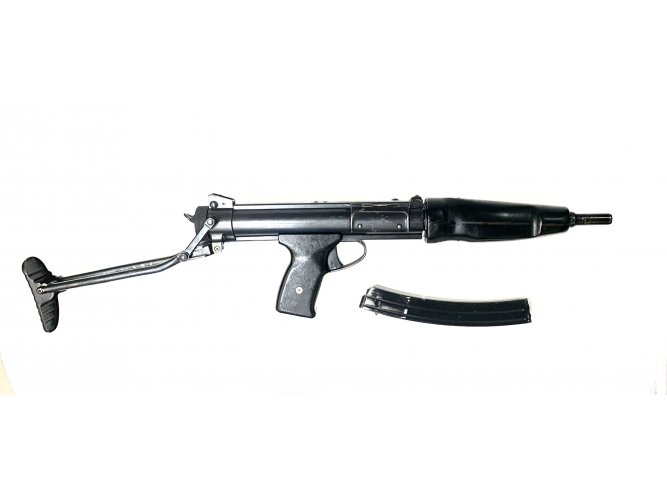 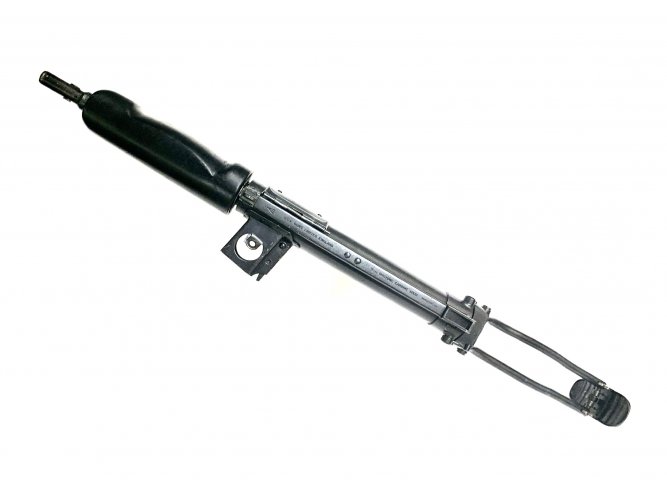 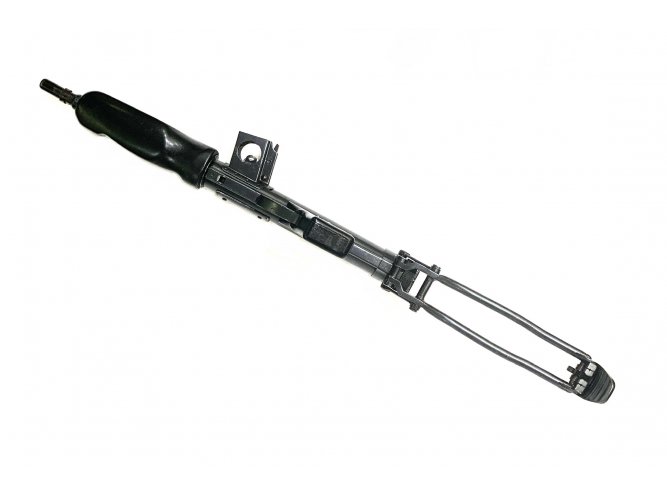 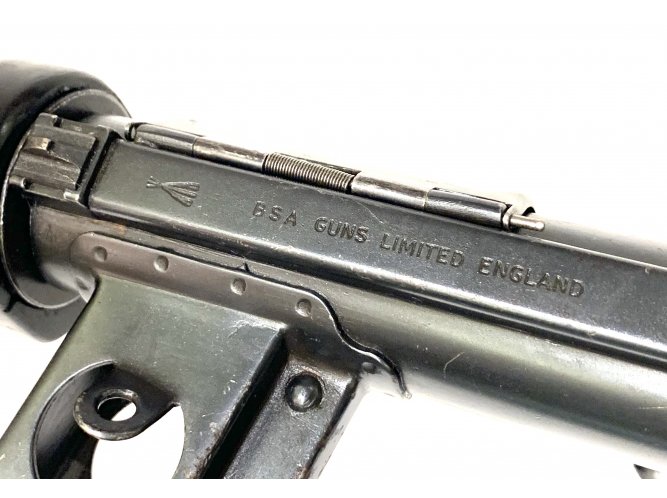 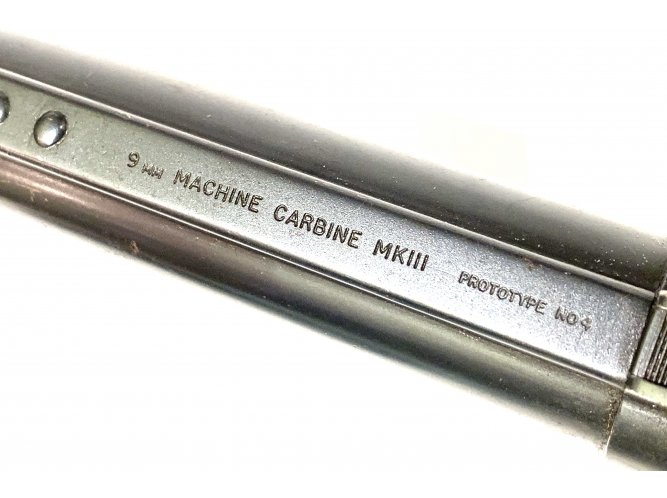 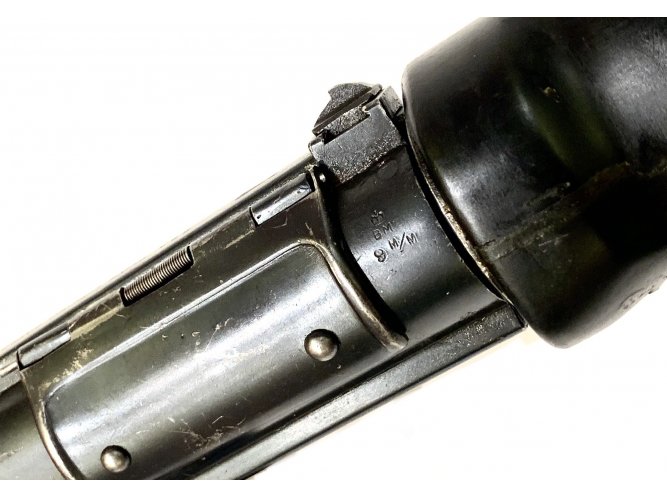 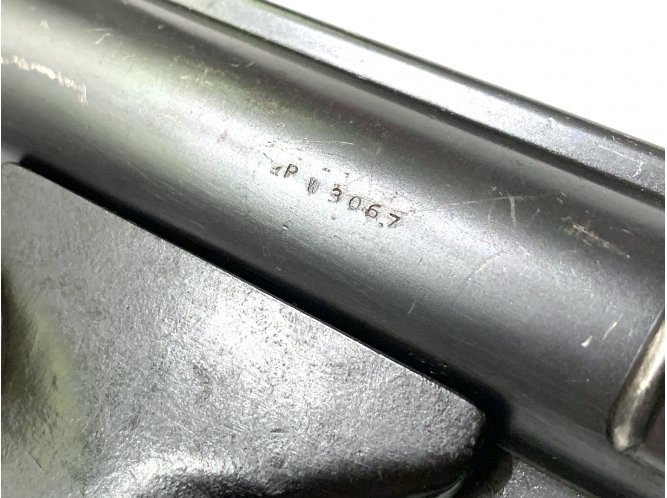 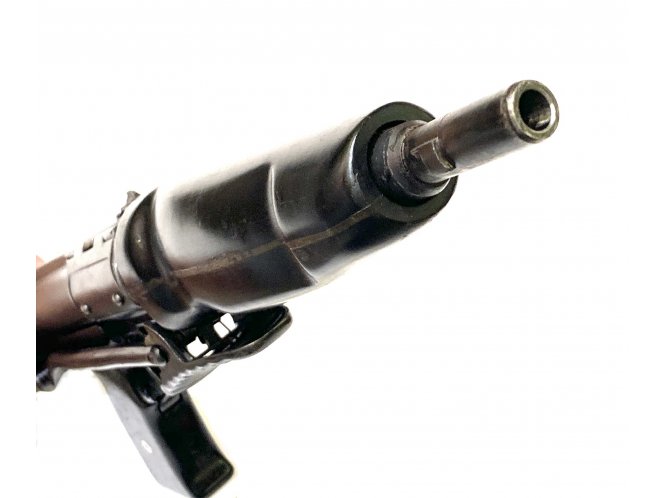 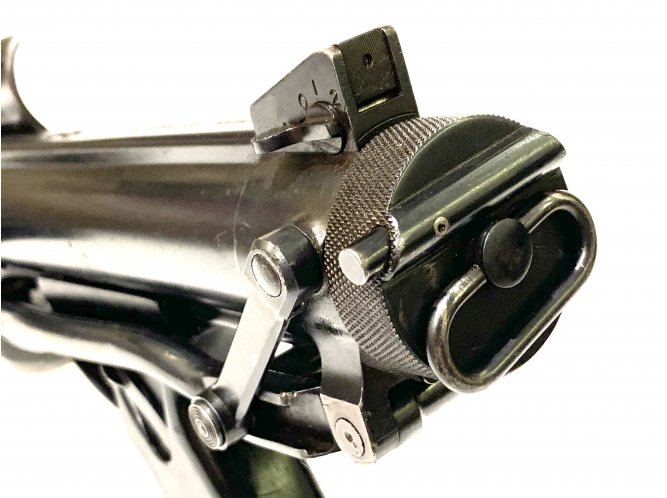 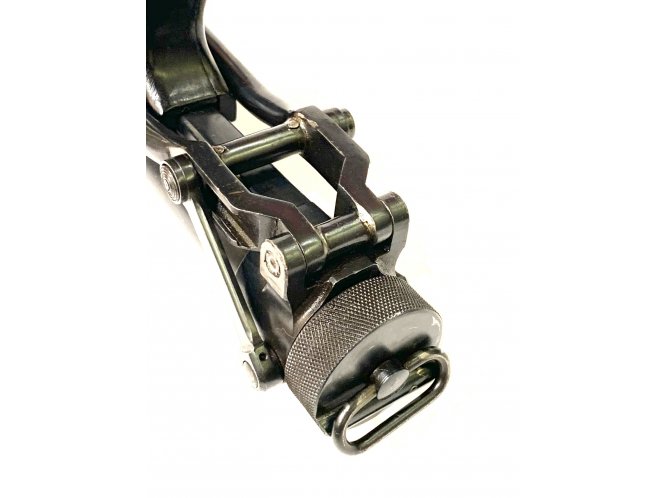 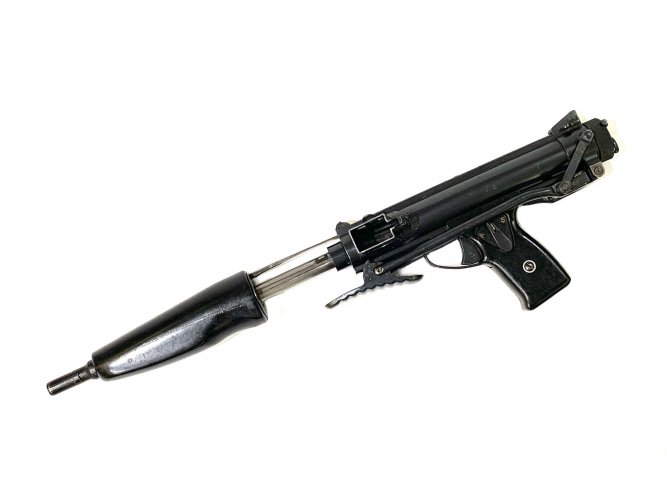 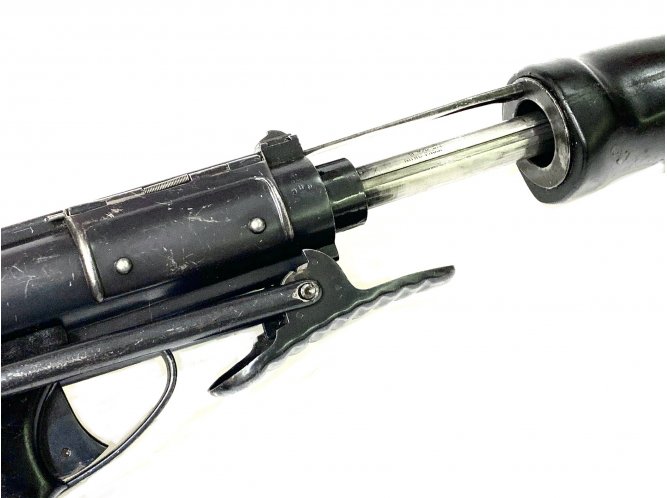 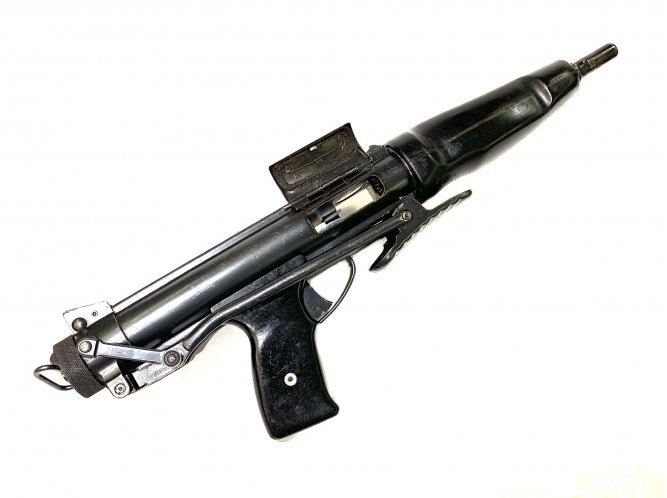 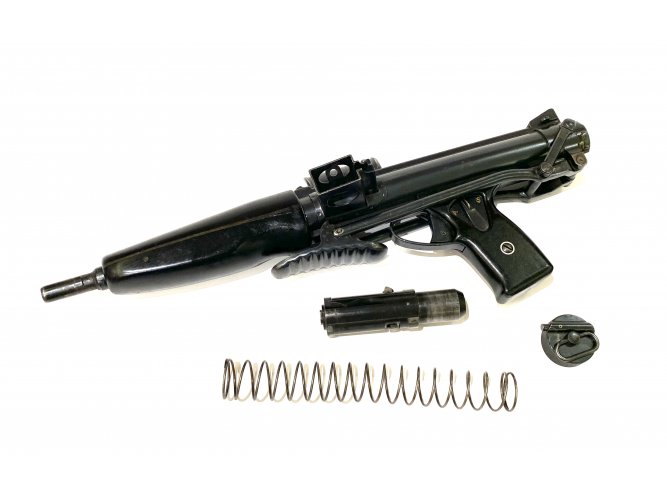 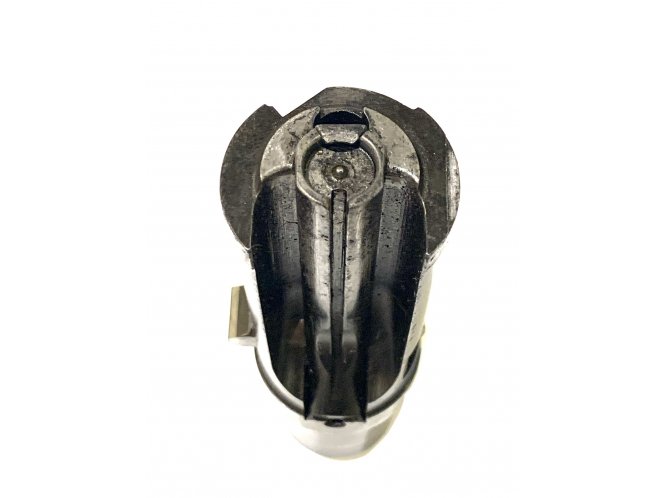 We are kicking off this week’s theme ‘Postwar SMG’ with a remarkable piece, a prototype machine carbine that was trialed by the British Army in 1951. Read on for another LSB journey in firearms history…

The STEN machine carbine had served the British forces well during WWII. However, it had become evident even before the war came to an end that a better gun was required in the post-war period. In 1944, Birmingham Small Arms, or BSA, was one of the British arms manufacturers that had begun working of a new design intended to replace the STEN.

The gun designed by Claude Perry and Roger Wackrow was a 9mm Para. machine carbine born out of a new and interesting concept. It did not have a cocking lever. Instead, the foregrip provided a pump-action cocking motion so that the soldier’s left hand would always remain locked on it. Moreover, the new gun had a folding magazine well into which a regular STEN Gun magazine would be inserted. BSA christened the new gun the ‘Experimental Machine Carbine’ or EMC.

This first prototype, with the designation ‘Mk I’, was demonstrated to the Army at RSAF Enfield in 1945. Its rate of fire was 530 rounds per minute. The army were impressed with its performance, but its weight was considered heavy compared to the STEN.

By 1947, when the gun was scheduled for trials against other designs, BSA had unveiled an improved model designated as the ‘Mk II’. In June 1947, the EMC Mk II was tested against the RSAF Enfield MCEM-3, which was a collapsible machine carbine, and found to be better. Following this first trial, BSA carried out further improvements on their design. The folding magazine well was replaced with a fixed one and a dedicated curved 30-round magazine was introduced for the first time. The Mk II now also featured an alternative cocking method.

Another set of army trials were held at Pendine between the 8th and 16th of September 1947. Several designs contended for the selection, including the improved BSA EMC Mk II, the Enfield MCEM-3, the Australian Kokoda No.1, the Patchett gun, and the STEN gun. BSA’s gun emerged as the favourite. The army immediately placed an order for 100 guns to be subjected to troop trials. However, in the end, only 6 guns were manufactured and submitted for the trials. This was due to the high costs of production.

The 6 BSA EMC Mk II guns were extensively trialed by the army, following which they were returned to BSA for modifications requested by the army. These included an improvement in the trigger mechanism. The general staff specifications now required the machine carbines to be able to mount a bayonet. This unexpected requirement in specifications led to BSA’s eventual elimination from the race. Their EMC Mk II could not accept a bayonet and the entire cocking foregrip had to be redesigned. The modified EMC, now designated the Mk III, did not perform favourably when it was pitted against two different models of the Patchett gun in 1951. The latter was seen to be the better option, and was soon to be adopted as the Sterling sub-machine gun. The BSA EMC was officially rejected in 1952.

The exists scant information on the actual number of EMC prototypes built by BSA. Some sources mention the figure of 18. However, our research leads us to believe that the number was considerably smaller and possibly not more than eight, consisting of one Mk I, six Mk II and one Mk III. The EMC Mk III that we are featuring today, which we sourced some years ago for a local collection, is marked ‘PROTOTYPE NO 4’. We believe that this number arises from the fact that this was gun was the same one which was fielded in the 1951 trials, which were the fourth ones held. If this is confirmed, then this gun would be the eight and last one to be built. This truly unique machine carbine has survived in remarkably good condition.