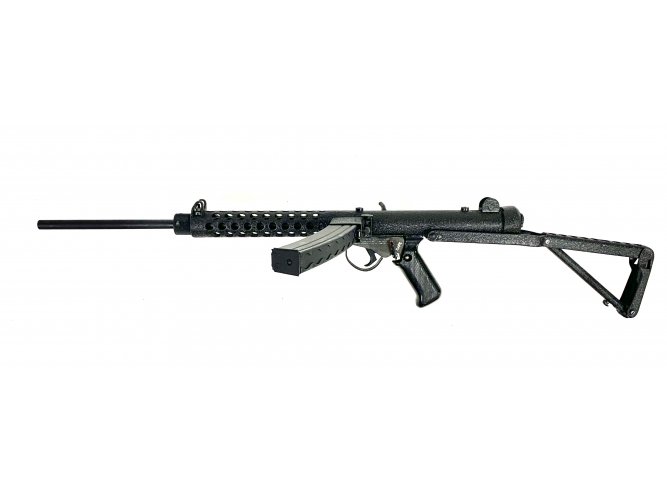 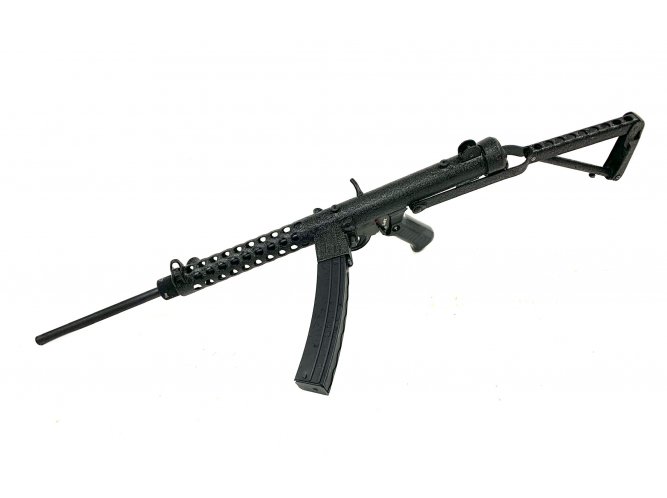 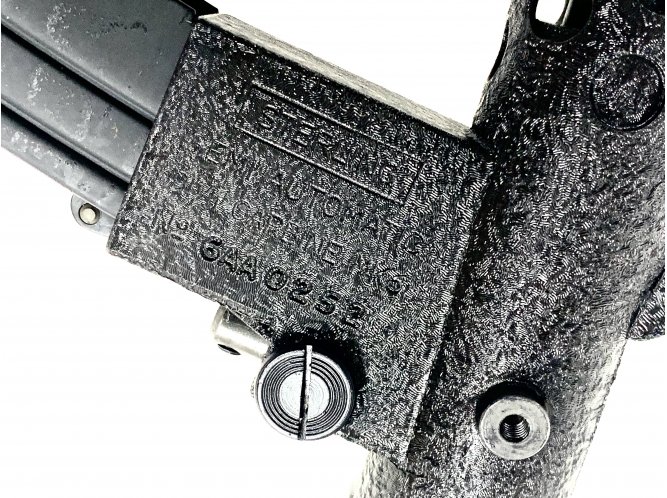 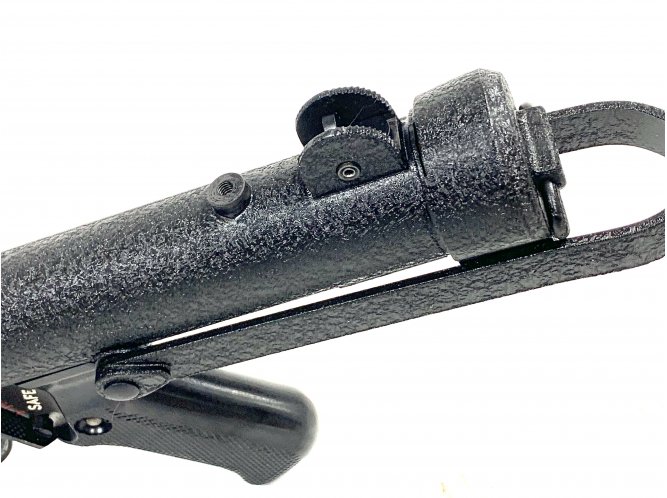 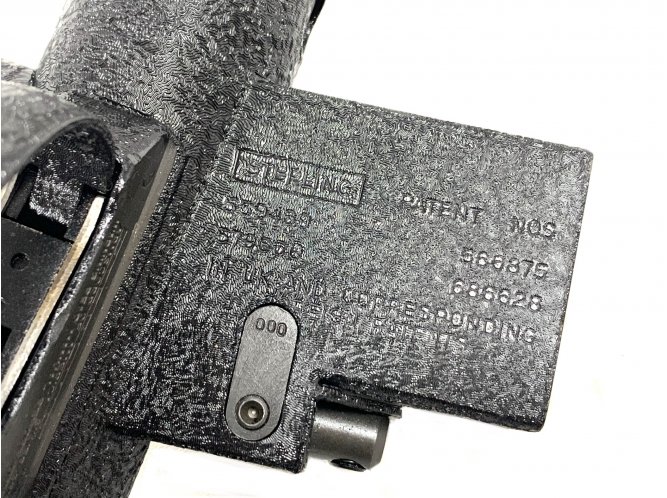 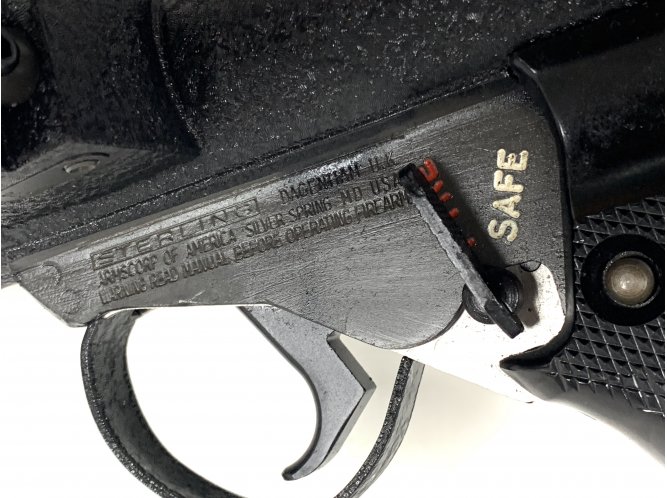 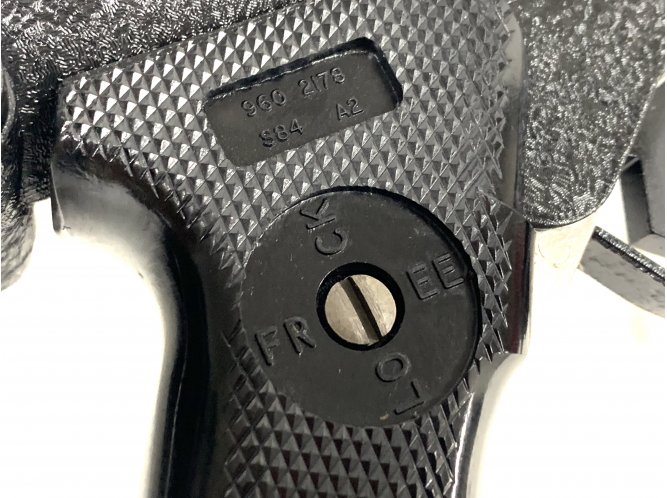 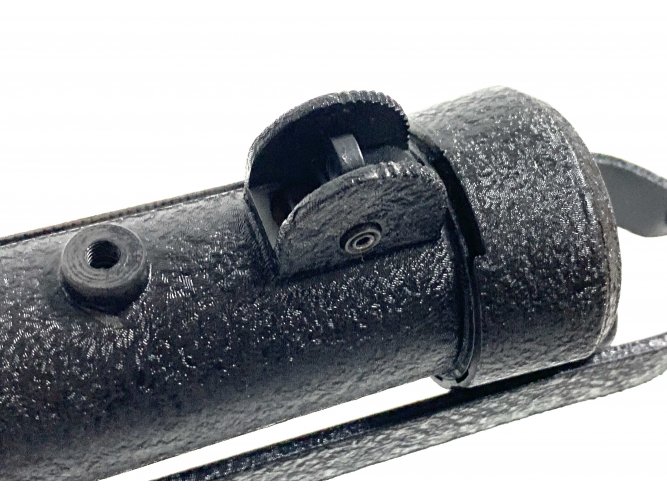 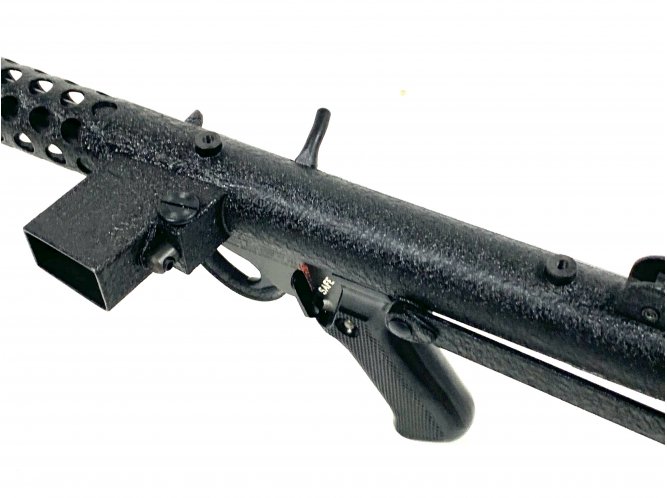 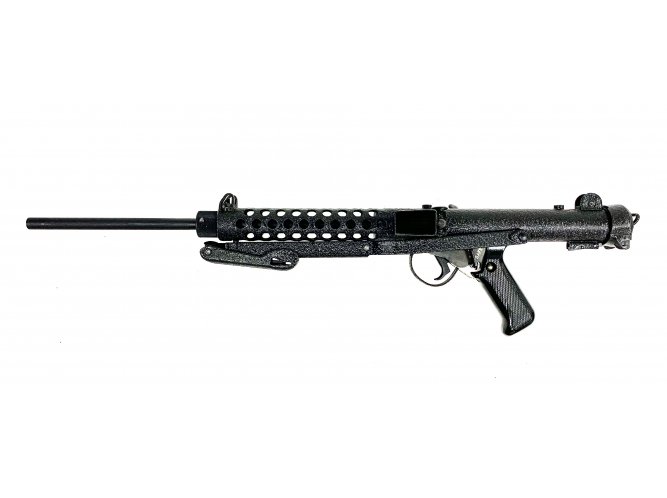 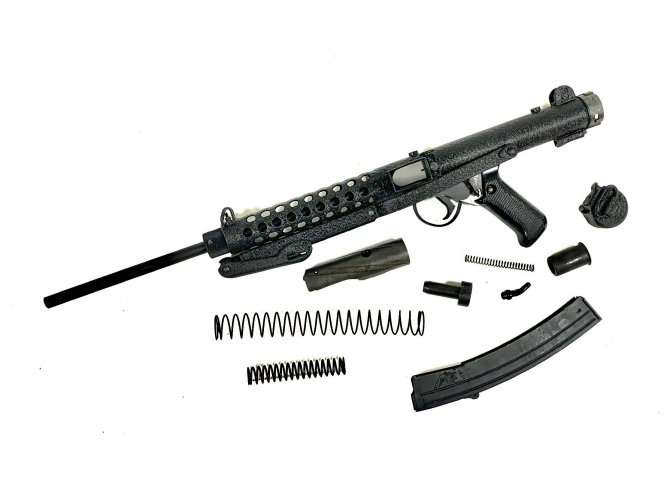 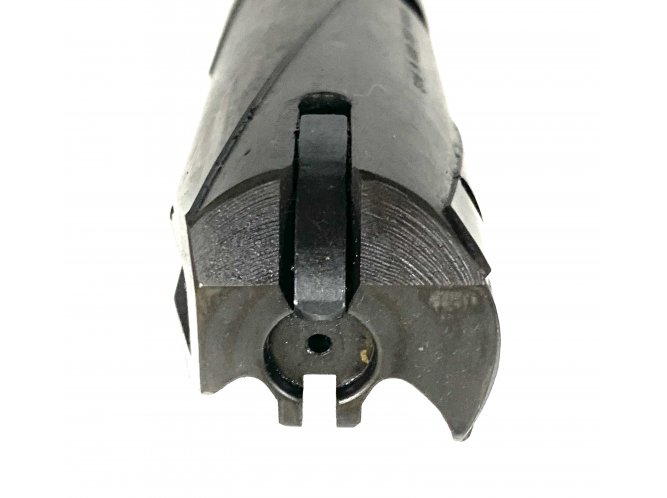 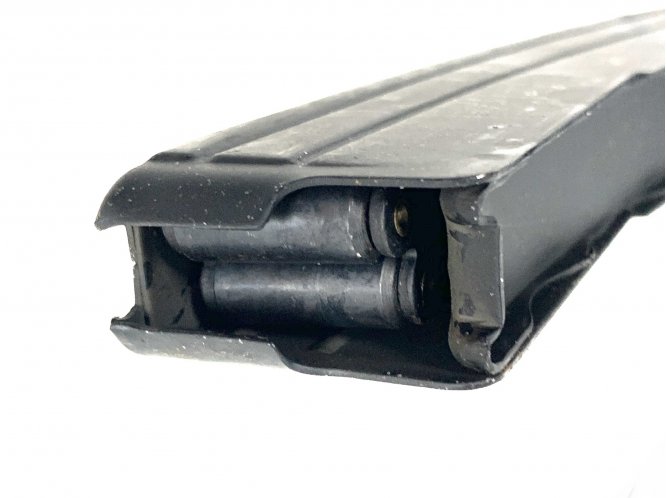 In yesterday’s post we discussed an EMC Mk III prototype machine carbine which BSA had submitted for the 1951 British Army trials. Our second feature in the ‘Postwar SMG’ series covers BSA’s competitor, the Patchett machine carbine that was eventually selected for the contract. Read on for another LSB journey in firearms history…

George William Patchett was the chief designer at the Sterling Armaments Company of Dagenham. In 1944 he responded to the British High Command’s request for a new 9mm Para. machine carbine to replace the STEN gun. His design was developed into the Patchett Machine Carbine Mk I prototype, which was considerably superior to the STEN gun in accuracy and reliability. It could take both the standard STEN gun magazine as well as the propriety cyrved Sterling magazine. The new carbine’s potential was immediately recognised by the army, which ordered 120 guns from Sterling for field trials. Some of these carbines received their baptism of fire at Arnhem in September 1944.

When WWII ended, Britain had a huge stock of STEN guns and a massive deficit. There was no means to invest in a new carbine so the STEN continued in service for several years. However, between the 8th and 16th of September, the army carried out comparative tests at Pendine between Sterling’s Patchett MC Mk I, BSA’s EMC Mk II, Enfield’s MCEM-3, the Australian Kokoda No.1, and the STEN gun. As these trials were inconclusive, more development work and tests were necessary. Finally, in the 1951 trials the army selected the Patchett. Sterling was contracted to supply the newly designated Sterling ‘Sub-Machine Gun L2A1’, which began replacing the STEN from 1953.

The Sterling employs a degree of what is known as Advanced Primer Ignition, in that the cartridge is fired while the bolt is still moving forward, a fraction of a second before the round is fully chambered. The firing of the round thus not only sends the bullet flying down the barrel but simultaneously resists the forwards movement of the bolt. By this means it is possible to employ a lighter bolt than if the cartridge was fired after the bolt had already stopped, as in simple blowback, since the energy of the expanding gases would then only have to overcome the bolt's static inertia (plus spring resistance) to push it backwards again and cycle the weapon. The result is a lighter but more controllable gun. The 34-round Sterling magazine was possibly one of the most reliable as it utilised rollers as a follower, guaranteeing a trouble-free feed. Sterling guns had a very distinctive black ‘crackle’ paint finish, which was quite durable.

Several variants of the Sterling were manufactured between 1953 and 1988, resulting in an overall production figure of around 2 million units. The Sterling plant in Dagenham supplied both the armed forces and overseas clients, whilst ROF Fazakerley near Liverpool constructed them exclusively for the British military. Production came to an end in 1988 when British Aerospace/Royal Ordnance decided to close the factory.

The following Sterling variants were produced during a 35-year span:

The Sterling also made it into the Star Wars movie series, for which it was modified into the Stormtrooper ‘blaster rifle’!

Today we are discussing as well as offering for sale a semi-automatic Sterling Mark 6 that is from a small batch of guns that were intended to be sent to the USA but remained at the Dagenham factory. This Sterling has a longer 16” barrel and it is beyond doubt the most accurate Sterling variant. The serial number range for this model has an ‘6AA’ prefix, and numbers started from 6AA0001. The highest serial number observed for a 16” Mark 6 is 6AA0399, giving rise to the assumption that only around 400 examples had been built.

The rare Sterling Mark 6 carbine that we are selling is one of the very few remaining ones available. The gun is in brand new, factory condition. It is both a great collectible as well as an excellent range companion, offering tight groupings, low-recoil and quiet operation.

If you wish to own this rare and interesting firearm, please send us a private message or phone us on 99471091 to reserve it until you visit the shop to see it physically. You will require as a minimum a Target Shooter Licence A or a Collector Licence A to be able to purchase it. LSB’s knowledge and experience in historical firearms assures you of a good investment. We offer a lifetime guarantee on the genuineness of the pieces in our vast inventory so that you may buy in full confidence.